To CBD marketers: “It’s not the Wild West over there”, FTC says

Ole Ole outs in free! The FTC, federal trade commission, just spread around a friendly message about unscientific claims in CBD marketing materials which are allowed no more. That’s important, I suggest for the blogs too, just in case to keep things white, shiny and in alignment to law, everyone wishes on oneself’s website of course

It’s Not The Wild West Out There

— says the saying in FTC official website. And it simply means but not limited to that (finally!!) no one can invent freely anymore the medical issues that cannabis solve, it’s over now, and it is a good news for us for the cannabis market.

In fact, health-related representations for CBD products are subject to the same established requirements of scientific substantiation the FTC has applied to any advertised health claim. So for sake of trustworthy information spread all around to end-consumers this enforcement is supposed to sweep any unproven representations that CBD products would treat diseases like cancers, diabetes and other serious medical conditions.

Despite what they say…(about CBD) 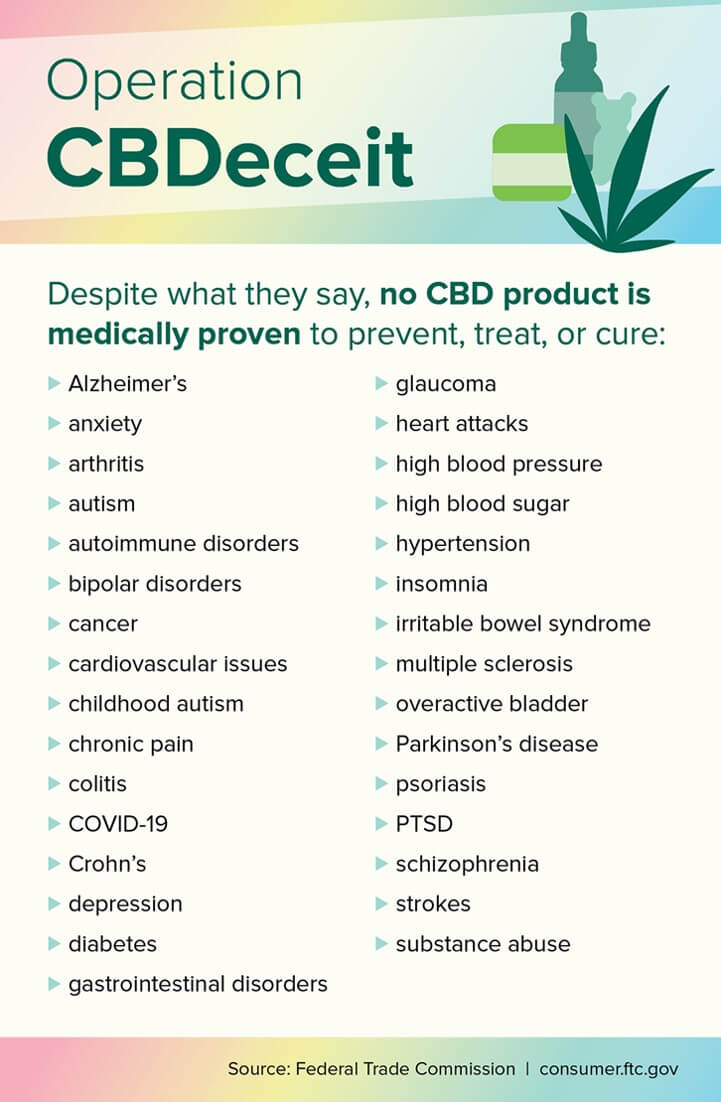 By far this is the official list of health conditions where Cannabis (and CBD in particular) DOES NOT help at all neither there is a scientific proof.

Colombian unit of “Forbes” suggests that Marijuana market in Colombia is reaching 166 million dollars in sales by 2025. The very weed-growing place on Earth this one was ever before, and even more it is now, the whole lot of cannabis companies, investors and private marijuana enterpreneurs appear in the country since the government has changed the strategy towards legal cannabis. The very milestone for the whole marijuana industry happened in 2016 when FARC (the, so called, cocaine syndicate, indeed it was a liberation army) negotiated peace with the government, bringing peace into the country after 50-year long civil war, and, also allowing the legal cannabis business in Colombia to continue ever since as the lawful enterprise.

Colombia obviously bears a certain image of the drug dealing place, mainly for its cocaine exports going out for half a century into all countries all around the planet. Panama channel, the biggest maritime hub of the world, played its role in it too, and the clashes on the border between Colombian syndicate force and government troops of both Colombia and Panama happened all the time, the babylon news say so, people in Panama say so, governments say so. That was the place where the war on plants went beyond “the cops surpressing children”, but more likely shaped into the form of a real fullscale war between the armed forces, far bigger than just a rebellion.

From the other side, no doubt, “the Colombian” became the synonim to “the Quality” in the street black markets of all countries, from those involved into consumption of drugs. The whole story is getting to be already the ancient history quite quickly, the war has gone, the Colombian government signed the historical peace treaty with the FARC syndicate, and the president is eventually got awarded by the Nobel prize for this. All is well. The peaceful new age arrived upon the beautiful country and it’s time to set the clock to 4:20.

Well, the past is the past, and now the un-intentinal strategy of making colombian quality trademark is a good card to play, the Canna World Congress takes place in Colombia, which is a good news for the nation, we shall hope it’ll grow into a big worldwide event influencing the industry. Here is the logic: the Colombian coffee, one of the best in the world, who may argue? and this fact clearly demonstrates the farming skills of the growers, the knowledge, the technology of the farming, along with Colombian soil and Colombian sun, are altogether the very proper combination.

The Revolutionary Armed Forces of Colombia, also called FARC, from Spanish Fuerzas Armadas Revolucionarias de Colombia, was formed in 1964 as a Marxism-Leninism war unit to oppose the imperialism. Ever since, all the way till 2016, the country experienced the endless fullscale civil war between the government and the FARC. It’s not the editorial of this website to judge which party was right’er and which was wrong’er, but the history of the world says both were badasses, with the only difference that only one of them making the official stats for casualities among and violations against civilians.

Anyway, among other activities (like politically motivated kidnappings) the famous colombian drug trade was what FARC was doing to raise funds, having the well established taxation system in the territories of their control, allowing farmers to grow, mostly cocaine and weed also, and in exchange giving the effective protection from the government enforcement. So, in 2012, after 50 years of the civil war, the long-long negotiated started, resulting the national referendum and then the Peace Treaty signed by both sides in 2016 in Havana, Cuba.

It’s in your hands, of all Colombians, to decide with your vote to support this historic accord that puts an end to this long conflict between the children of the same nation, —

President Juan Manuel Santos (of Colombia) said, according to an Associated Press translation, prior to the national referendum on the peace treaty with FARC

The part of the deal touched the drug trafficking, so that FARC should stop making cash out of worldwide cocaine trade, and by that allowing the government to develop the rural communities, whereto they have had quite a limited access in times of war. And the drug legislation of the country has been changing along with the peace negotiation, of course.

In 1994 the possession was decriminalized in Colombia, by decision of the Contitutional Court, making the country to be among the first countries, like Uruguay, Netherlands, Portugal, Argentina, not many but they are a number, loosing the tention of the globally histerical war on plants. Personal use has become legal de-juro, and possession of 20 grams of weed for personal use are not prosecuted since 2012, and also this includes 1 gram of cocaine. Home cultivation of 20 plants for personal use is legal since 2015.

However, the anti-plant activists applied another attempt to limit marijuana use back again, when the government quite suddenly disallowed the use of weed in public areas in 2018, also enabling police to perform personal search and confiscation of drugs, including those small decriminalized amounts of porro in violation of the existing laws. Half a year later the consitutional court acknowledged the mentioned “enforcement” being unconstitutional, in 2019.

Do not forget to check on all laws, decrets, latest news before doing anything in this regard in any foreign country, it is not yet a total nirvanna in the world yet, many changes apply continiously, and especially nowadays they are frequent everywhere.

Law 1787 is the main on Cannabis Business in Colombia

The Law 1787, dated: 6th of July of 2016, is now the main document for the cannabis market in Colombia, allowing production, trade, transport, import and export of medical cannabis, industrial hemp, or other scientific purpose, and by far not allowing explicitly the recreational trade except of the personal use (which is not the trade) with the 20 grams in personal possession, and 20 plants at home.

The business activity on cannabis should be licensed, this law suggests, by National Institute of Control on Medical Substances, and in Spanish, in case you need it for search to explore more on the topic, its name is: Instututo Nacional de de Vigilancia de Medicamentos y Alimentos.

And yet another useful link would be the Association of Cannabis Industries:

Thailand fresh update is here. As said in Forbes, and I believe it’s already anywhere else said, that Thailand government shows again very serious intentions toward medical marijuana market, and they are doing fast! Thai Officials already promised few months ago, that the whole Thailand shall gain from legalization, now it is surprisingly coming true. Recently the Minister of Health of Thailand stressed twice in a speach, that “We are in the process of changing laws to allow the medical use of marijuana freely. We have high confidence that marijuana will be among the major agricultural products for Thai households. We are speeding up the law changes.” (due to Forbes)

Sweet! I’m checking tickets to Thailand. I ever loved this country from my first visit, and now they are going to trade weed freely. Of course, I think, the households may obviously lack in growing technology, they could hardly hold a very accurate thc limitation. I think, we are having beautiful Thai weed all around for the next couple of seasons hopefully. Don’t be much in a rush, no deadlines set yet, but they speed up, speed up, speed up. Check where the situation is now before going to Thailand if weed is the purpose, don’t go tomorrow morning asking marijuana in airport – still the bad plan.

Thai Weed to be a Bordeaux of marijuana?

Here is the hint for staying in Thailand longer: In Thailand many backpackers stay for long to try their fortune. Freelancers, online workers, like writers, designers, developers and stuff. If anyone meets a coin miner, ask him how’s Thailand in his field, we can add coin miners to the list )) It may be something changed, but as for my last check it was always extremely easy to have an education visa in Thailand. You apply to one of Thai language schools, which are numerous in the country and in Bangkok specifically, and I think it’s even fun to learn Thai a little, and by such they allow you to stay in the country for few months while the course lasts, there is some minimal requirement for a visa-run, like you need to make it once in a while but not often (requires a double-check). Having this permit you’ll be visiting the immigration office monthly or bimonthly, they may ask some “how are you” in Thai to see that you really study it, even if badly. They also perform random checks in class that you really attend it. Pretty much a system like we all have had in school, hahaha. And the good news that instead of Thai language you can alternatively apply to an English course, or some Thai Food Cooking course, and still you are having the same educational stay permission. I think you can do either in your own country, or right from the country. All works. Tested. Very easy.

On the head photo – Intamara neighbourhood, in Bangkok.