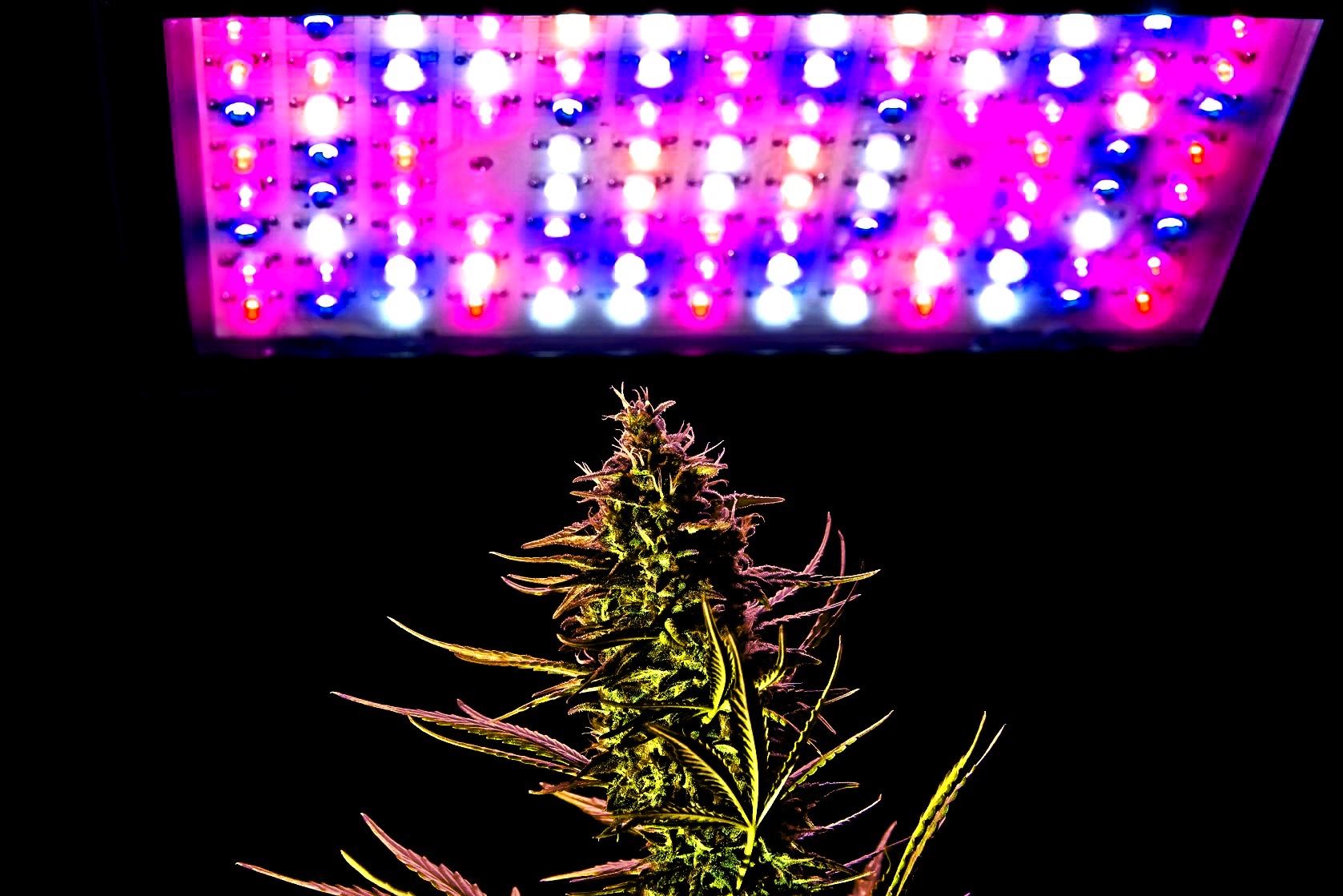 Using properly LED lights for growing weed indoors is the essential and vital for the plants and for the quality of the future marijuana harvest. Read how to avoid the common problems, how to choose a led-light for the best efficiency and how to install it properly inside a home growing space: proper distance, proper schedule, enough power, …

Modern LED grow-lights already have a wider light spectrum for a better, greener and healthier growth, and as the specialized lenses have been developed to point the light directly onto the plants to increase light penetration, yields are much bigger than when compared to the models from just a couple of years ago. This guide to using LED lights for growing the indoor medical weed will tell you everything you need to know to have a successful harvest.

There are several different types of grow-lights to choose from, so why are LEDs the best choice:

1) LED grow lights are cutting edge and use a customized light spectrum for the best growing results. They evolve permanently, and entertain us with new inventions like COB, for example, which is a new chip-on-board technology for lightening your home crops of hemp or weed, whatever your reason is.

7) LED lights offer a “plug and play” lighting system, allowing them to simply be plugged straight into the wall with no need for a ballast 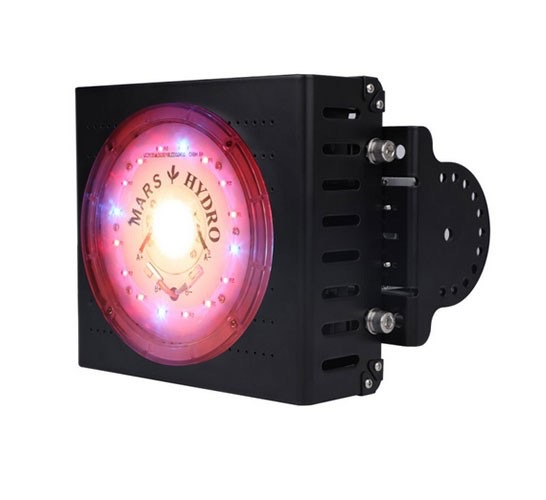 How Far From The Plants Do The LED Lights For Growing Need To Be?

One of the things to watch out for when using LED grow lights is that they must be placed at a greater distance from the plants than traditional CFL lighting, and this means that you need sufficient height in your growing space. LED grow lights must be kept at least 30cm to 45cm away from the top of the plants – a big different when compared to the few inches which is suitable for CFL lights.

Many LED lights come with manufacturer’s guidelines as to where to the height at which to place the lights above the plants, however many growers produce good results by starting higher and then moving lower towards the tops of the plants as they grow. When using 400W or 600W LEDs, some manufacturer’s recommend beginning as high as 90cm and then gradually lowering their height to around 18” over the course of two weeks. Although lights vary between manufacturers, a general guide to the correct height for LEDs is as follows:

How To Use Your LED Lights For Growing

When choosing LED grow lights, often you will find that you achieve a better result when using several small panels rather than a couple of larger ones. For example, two 125W LEDs (with a total of 250W) often produces a better result than a single 250W model and this is because it is easier to spread the light around to the most needed spots with more panels.

LED lights for growing with a 3W chipset are generally the most effective at producing a larger yield and are unlikely to burn the tips of the plants. Overall, you should aim for 50W to 60W per square foot of growing space when buying LED panels to get the best result.

Although LED lights for growing produce great results, they can be tricky to get to grips with since they grow plants in a different way to other types of grow lights. 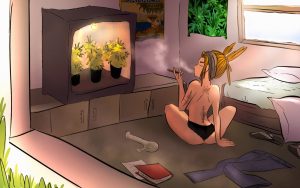 One of the main problems is that if the lights are placed to close to the top of the plants, they can cause the leaves to become discolored, in the same way as a nutrient deficiency woord, even if you know the nutrient levels are ok. This is an especially common situation during the budding/flowering phase, particular toward the end of the flowering phase. The tops of the buds may also bleach due to excessive light, so it’s important, therefore, to keep the lights a minimum of 30cm to 45cm inches from the tops of the plants to guard against this light burn problem. You will be able to tell if your plants are suffering from light burn as opposed to nutrient deficiency because the lower leaves will look healthy and green while the top ones look discolored.

Another thing to watch out for is the possibility of accidentally over-watering your plants. This often happens when switching from more traditional grow lights which produce a lot of heat since plants grown in hot environments need a lot of water. As LEDs produce considerably less heat, less water will be required and giving your plants too much can result in damage. The roots of your plants will need oxygenation in order to grow quickly, and over watering will reduce this process, thus reducing yield and plant growth.

Since LEDs produce less heat than traditional grow lights, you may also need to think about investing in a heater for your growing space, especially if you live in a colder environment. You may have been used to your traditional lighting providing sufficient heat for your plants to grow, but without this added warmth, your plants may fail to flourish unless you add an additional heat source.

LED grow lights are a costly investment, so you need to make sure that you take good care of them. While the money that you spend on this light type offsets the expenses of other types of lights such as venting systems, air conditions, reflectors and ballasts, not to mention the excessive electricity consumption, you could find that your LED lights for growing can be damage if a lot of high wattage devices have been connected to the circuit as this can result in voltage fluctuations which may damage the power drivers in the lights which provide power for the diodes. This is especially important to note if you are powering your grow space with solar energy, since this type of system is prone to power surges and spikes. The best way to take care of your LED lights for growing is to buy a power stabilizer which can regulate the voltage being emitted from the power box, eliminating the power fluctuations which could damage your device.

One further problem to look out for is a possible magnesium and calcium deficiency in your plants. This is again because of the lower heat levels that LED lights produce. Since the plant leaves will transpire less moisture then when grown under an HPS system, this means that the magnesium and calcium ions will be less mobile, thus causing deficiencies that will need to be correct with extra nutrients. Although this is a simple problem to rectify, it’s important to be aware that it could occur, since the soil will already contain the right level of magnesium and calcium. The good news is that supplemental magnesium and calcium nutrients can easily be bought in grow shops and will solve this issue quickly and easily.
The Advantages of LED Lights

One of the greatest advantages of switching to an LED grow light system is that they can hugely save on electricity. As an energy efficient form of lighting, LEDs can cut your bills dramatically since they use up to 60% less electricity than more traditional forms of grow lights. Another advantage of LED grow lights is that they reduce your growing footprint, especially when compared with running HPS systems which draw a lot of energy.

For even greater convenience, LED grow lights provide full spectrum light wavelengths, and that means that there isn’t any need to switch your bulbs for the flowering and vegetative stages, since one set will work for both phases of your plants’ growth. Since LEDs also produce up to 80% less heat, it is much easier to climate control and vent the growing area, and much cheaper too, especially if you’ve been using an air conditioner to keep the space at an appropriate temperature.

One further advantage is that LEDs contain UV light for less fungus, mold and pests, and as they have a lifespan of up to 50,000 hours, you won’t need to replace them very often. Yes, they may be expensive as an initial outlay, but they recoup the expensive in around four to five growing cycles.

As LED grow lights produce considerably less heat than traditional lighting types, there is no need to water your plants as often since evaporation will be reduced. You’ll also need to add fewer nutrients since the plants will use up their food less quickly due to reduced heat and reduced water. This means you’ll have much less maintenance to worry about, less chance of unwanted nutrient build up in your growing medium and also less risk of accidentally over-fertilizing. Not to mention the cost savings that you’ll enjoy too!
LED grow lights are also known for producing a better aroma and taste than other types of grow lights since the lower temperatures in the growing space allows more flavonoids and terpenes to stay inside the plant tissues instead of being lost into the atmosphere. This means that there will be a less strong smell in your growing area and a more tasty and flavorful bud.

Since LED grow lights are conveniently and much smaller than bulky HPS lights, they will take up a lot less room in your growing space. This means that you can use a small grow tent for a more discreet approach, or grow more plants in your available space than you would have been able to with larger lights.

With the advantages of switching to LED grow lights becoming clear , it’s easy to see why they have become so popular with growers over the last few years. Modern LEDs are powerful yet efficient and are also cheaper to run compared to older style lighting systems, and since they run cooler they are a much more convenient solution to growing at home.

As they are optimized to the plant light spectrum, they provide a customized approach to growing that doesn’t waste energy and yet produces an impressive yield and product. As time goes on, it’s likely that even more people switch to this style of grow light as their benefits are fully realized.