What is THCV? THCV strains

THCV (tetrahydrocannabivarin) naturally occurs in a cannabis plant, first of all, and is a minor cannabinoid. A curious fact: as it depends on type of weed how much of munches we are going to have when bake it, this is most probably the matter of THCV amounts in the strains.

Cannabis chemistry as always. So, THCV, tetrahydrocannabivarin, is the cannabinoid which opposes the stimulation of appetite by THC. Let’s see what else THCV does. 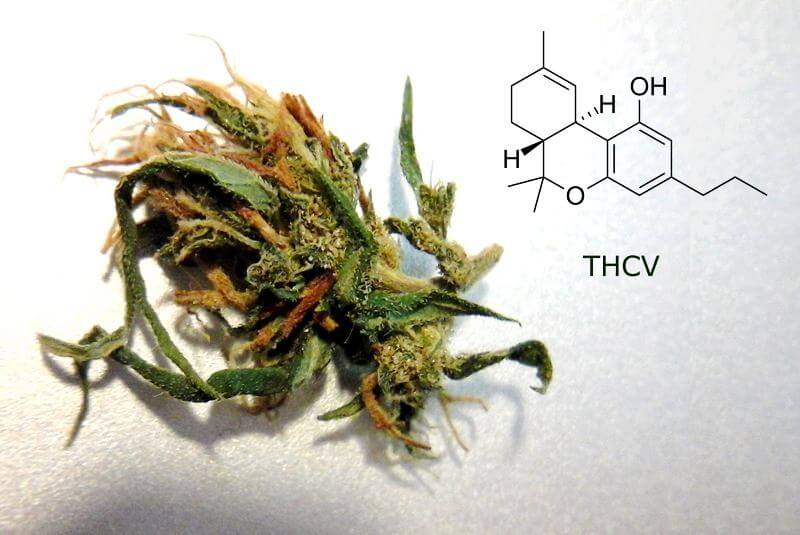 THCV is molecularly similar to THC yet different enough to produce different effects. In small to moderate amounts THCV has almost none of psychoactive properties and may in fact cannibalize partly some “highness” delivered from THC.

Anyway THCV is a super new with a lot of investigation and discoveries ahead. Some researchers suggest that in bigger amounts THCV may produce a pretty high psychedelic trip that also comes up very quickly.

Both THC and THCV interact with the same cannabinoid receptor type CB1 (there are two receptors in total, the other, you guess, is named CB2) in the human system, in the brain. THC fits perfectly into this receptor which may drive the whole situation (among other effects) to the increase in appetite, aka munches. But the THCV act at CB1 as antagonist which means it decreases the effects of THC about munches.

THCV may also act at CB2 receptor, as both agonist (adds high) and antagonist (reduces high) depending on the amount. As it is an agonist on the greater amounts this may explain the reported psychedelic effects.

Obviously THCV research is a little behind so to say comparing to THC or CBD research, many consider THCV a very promising cannabis compound, applicable to many medical situations. What is known now THCV fits into the CB1 receptor differently, so it may block the reward centers associated with the pleasures of eating food.

“As a CB1 antagonist, THCV has been shown to reduce appetite in murine models”, — Wiki says.

I wonder, the laboratory mice busy with a serious decease or a fatal body damage, suffer and pain, what would they feel if would ever think about other mice whose job is being baked all day, overdosing then munches. A philosophical question.

Where There Is THCV

Most strains contain nothing to little THCV as it is a minor cannabinoid by definition. Definitely not enough. Cannabis strains of African origin such as Durban Poison tend to have higher levels of THCV (ask the seller as it may vary), which may have upwards of half a percent which still isn’t very high. Most strains do not have this cannabinoid at all, Durban Poison is one of few strains that does have THCV. Some of the strains that have more THCV than others, asking a seller is a good idea, as soon as there is a reliable seller already delivering rare strains seeds.

THCV (tetrahydrocannabivarin) is a minor canabinoid. What does it mean? It’s spotted rarely, hardly isolated due to small amounts, then the price follows, etc, etc. Typically it is reported that THCV is found in well amounts in African strains, say, Durban Poison from South Africa (check out seeds)

Where cannabis is legal, where THC is legal, THCV is legl too, it is not a separate question. “Technically” THCV is federally legal yet it more often touchdowns the gray area, when it comes to money and trading.

THCV is not scheduled by Convention on Psychotropic Substances. In the United States, THCV is not specifically listed as a Schedule I drug, but “Marijuana Extract” is.

THCV could be considered an analog of THC, in which case, sales or possession intended for consumption could can relate to the Federal Analog Act in the United States.

As usual — not a legal advice, neither a legal reference. The situation around cannabis changes continuously, number of regulations grow, including and not limited to safety standards, drug definitions, FD&C Act (the link is more about CBD but serves as a perfect tutorial for the whole idea how the FD&C Act is applied). Knowledge is power, do not forget to double check it with a lawyer.