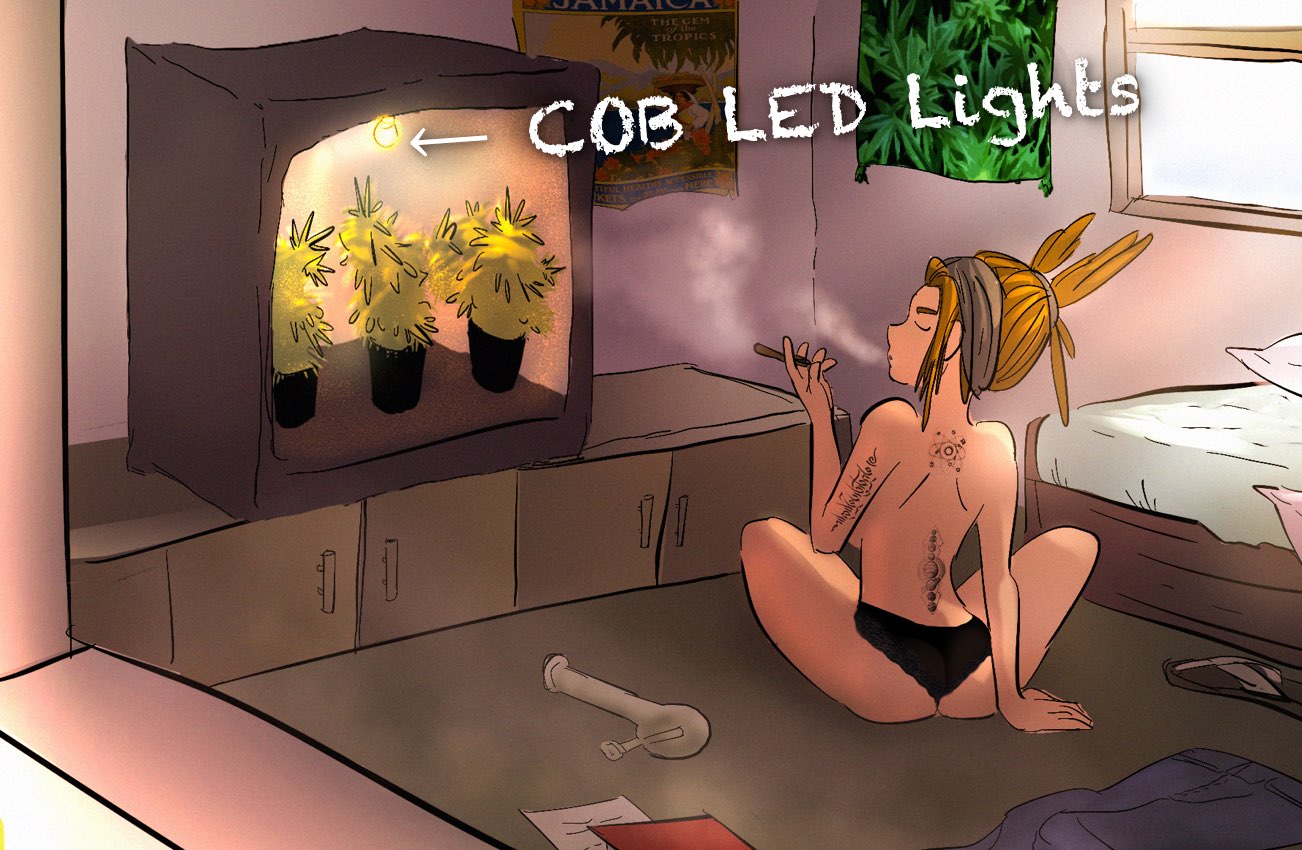 The latest technology in LED-lightning is COB, Chip-on-board LED light. Full of benefits, except the price, it fits much better into a smaller growing space: a closet or a tent; it emits narrower beam resulting more light onto area (read: more herbs!!). Economic, powerful, beautiful and expensive.

COB (short from Chip-on-Board), is a LED packaging technology that suggests mounting multiple LED chips directly onto a supporting ceramic surface to form a single module, known as COB LED chip. These multiple LEDs tiny in size, wired and packaged together they appear like a bright solid panel and function as a powerful light source: 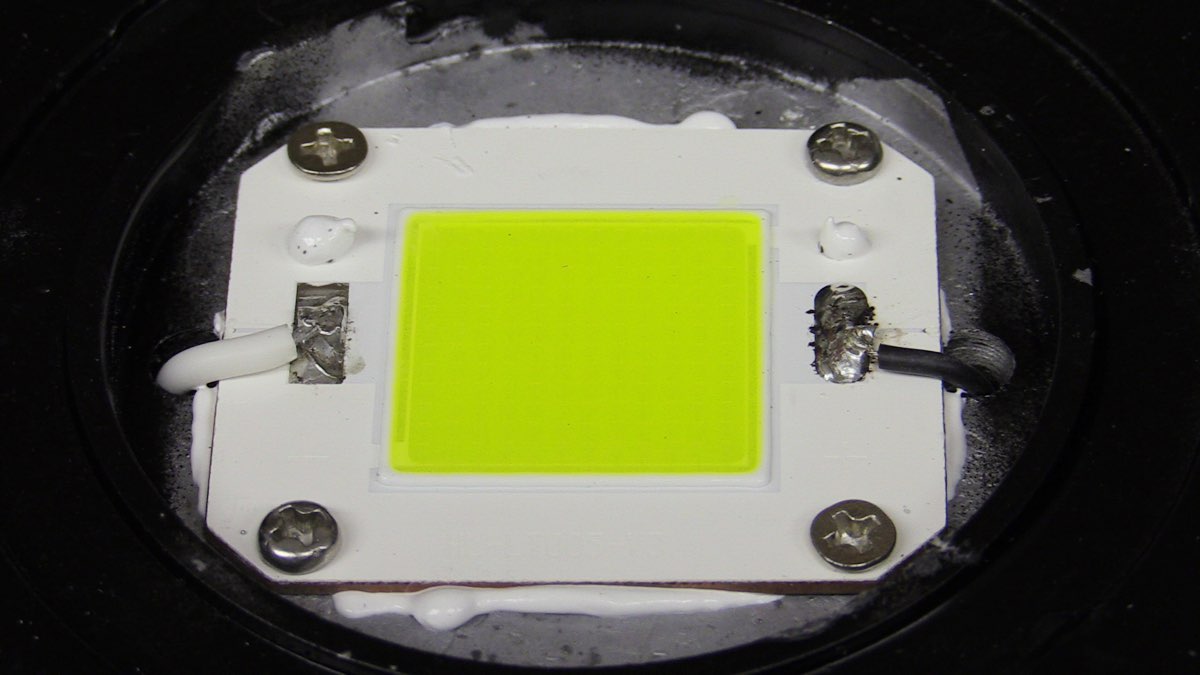 The SMD comparable to classic LED “replaces” those long leads of each diode (known as the cathode and the anode) shrinking a total light unit in size significantly. And COB replaces the full circuit making it one ‘solid’ piece. COB even more decrease the size of a unit, offering more ‘led-lights’ per area, therefore more light is emitted, more dense, and less loss in power due to integrity of the piece. The surface where they fixed to is now called the ‘substrate’.

First of all imagine an old-school LED = Light Emitting Diode. For example ones shown on the image below form a LED-light. This technology is already an ancient history of LED lights: 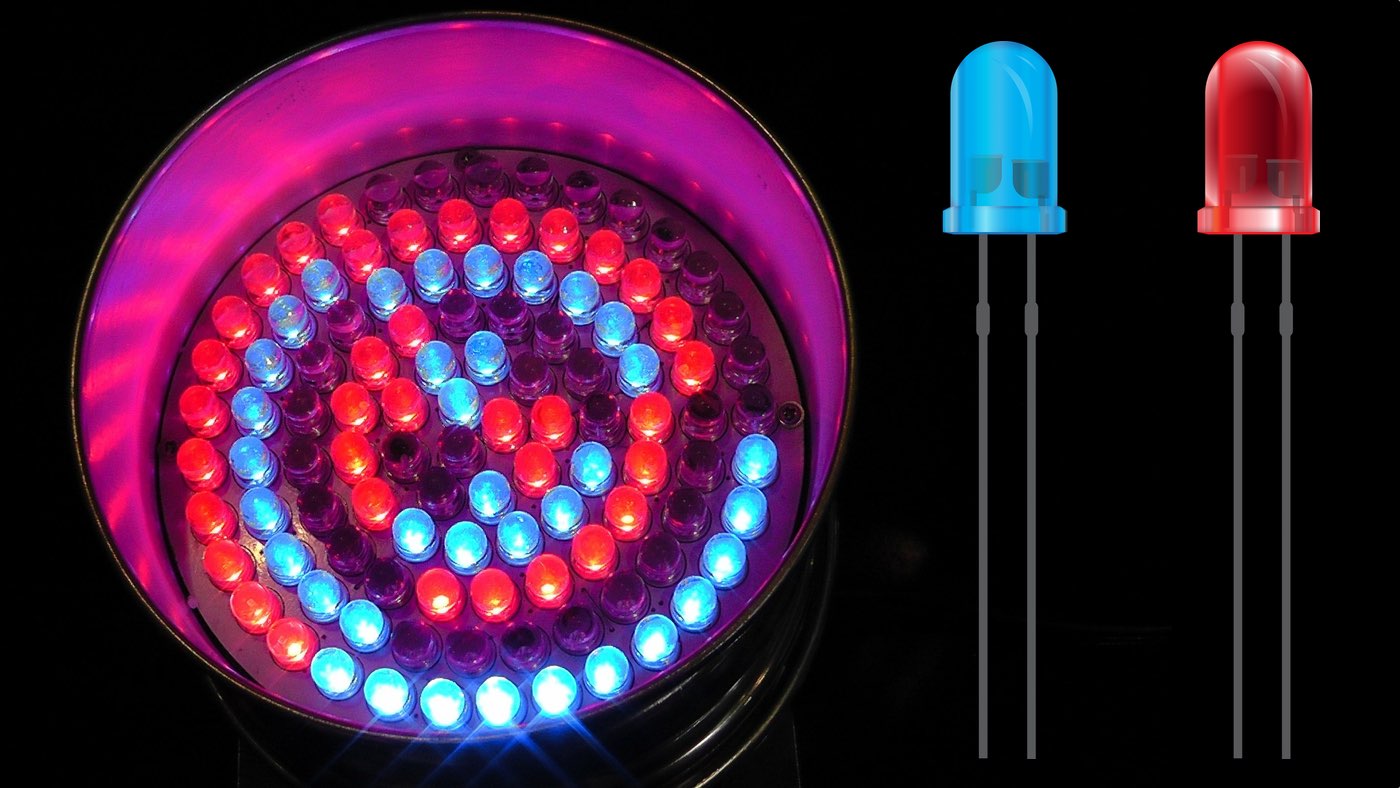 This is a simple traditional LED, already the Past.

Then comes SMD = Surface Mounted Diodes, sometimes referred as Surface-mounted devices… I don’t know which is correct, it appears like both exist. Anyhow, this is the Surface-mount technology, and it suggests when a small ceramic panel consists of a number of small diodes mounted onto this surface/panel one-to-each other very closely. A group of such ‘surfaces’ (the SMD chips) then form a LED-light (see the image below). Comparing to classic old-school LED, this SMD provides higher reliability, smaller size, and a neat and cute look too: 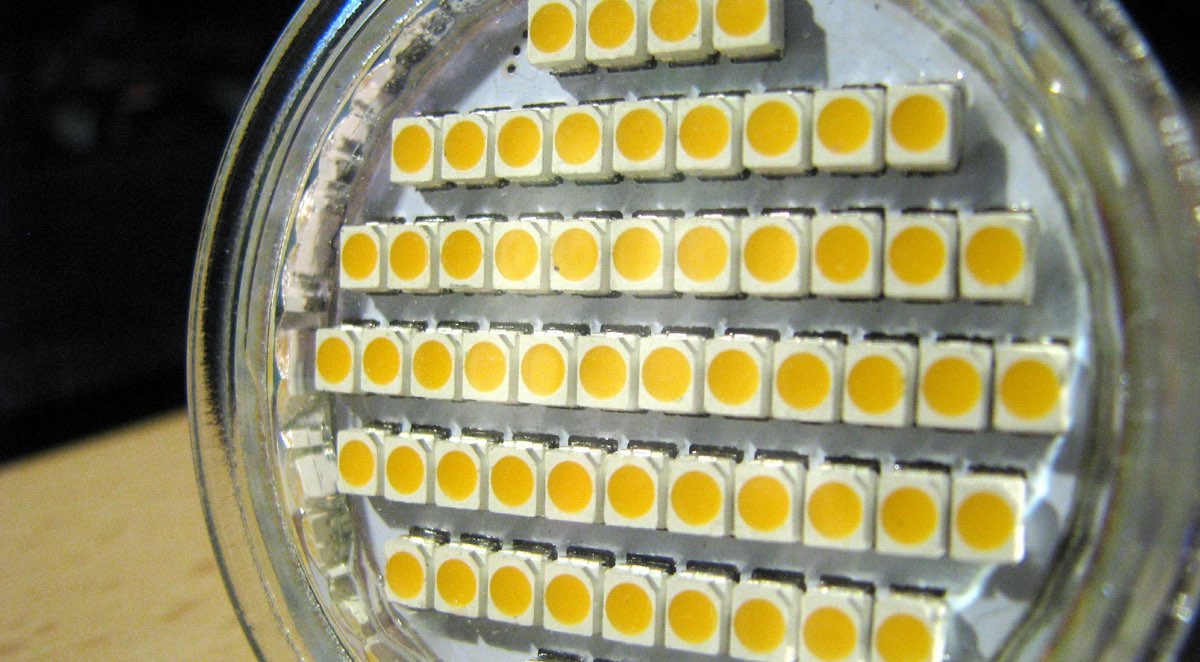 This is SMD LED chips, the most popular LED Light technology nowadays.

COB = Chip on Board, is the next great step in LED light development, when they place all into one panel (typically 9 or more chips) and it gives more light, significantly less package size, and even greater performance in terms of amount of light. Looks like a small solid panel of light: 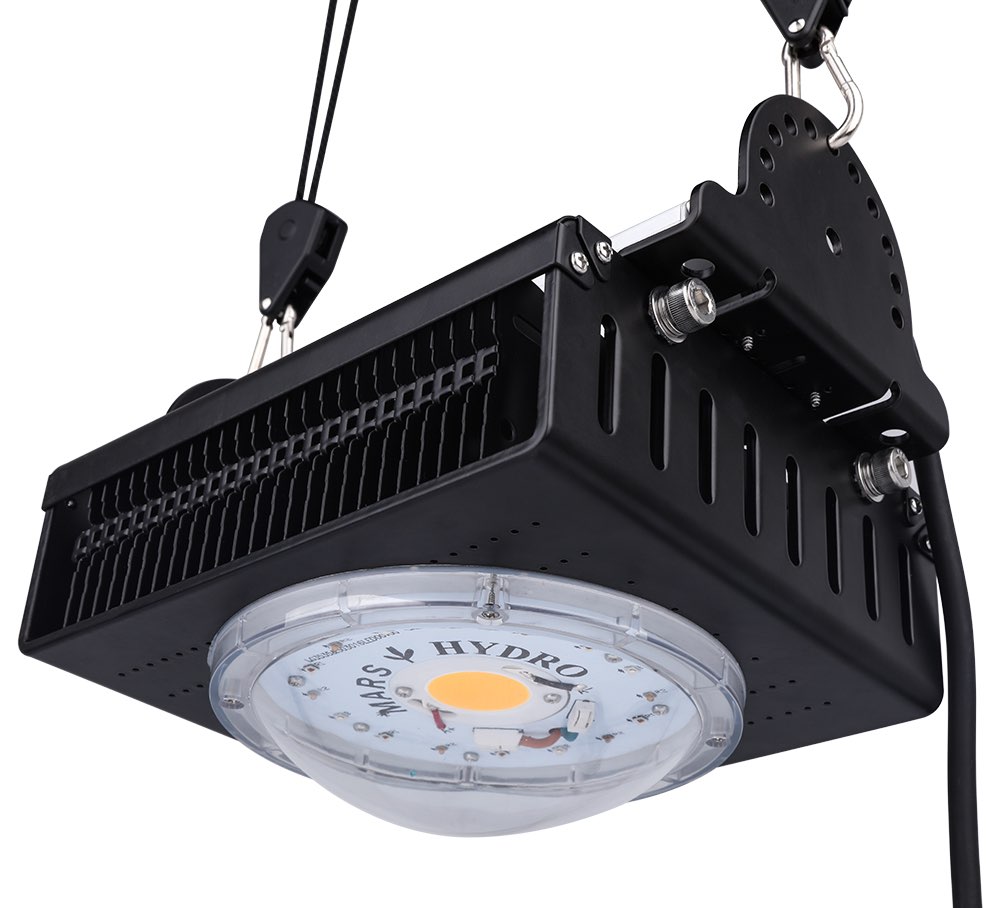 — the Chip on board is the growlight latest technology, increasing density of diodes (again) increases the overall efficiency (again), saves space in the green-house and offers more light from the same area

— The COB LED Chip on a COB LED Grow Light! The yellow spot in the middle is the chip, the substrate where to the diodes attached closely to each other altogether to form the LED-light. Fancy, technological, innovative. This is the Mars-hydro’s COB model on the shot above.[/caption]

The COB LED package appears more like a solid lighting panel rather than multiple individual lights, comparing to the traditional SMD LEDs mounted closely together. See the images above for both.​

COD is more expensive in general than a regular SMD. Roughly $300 against $200. This is simply because it is a fancy-new technology, but then think that it’s always worthy to invest into self.

Smaller space required to place COB light unit. No more headache about how to fix an extra electric box of lights over the plants inside your small green-house (whether it is a closet or a grow-tent or whatever indoor growing space). One small COB led-light now shall give you all the same amount of light.

COB led-light is simply convenient, and we at times pay for the convenience too. Think about, that applying to a new technological thing will give an extra knowledge about the technology in general. Isn’t it fun by itself? Some day the COB lights shall finally replace SMDs which are ‘regular’ now, and by that point you already know everything about it in practice. Sounds cool?

No noise. COBs are fanless. 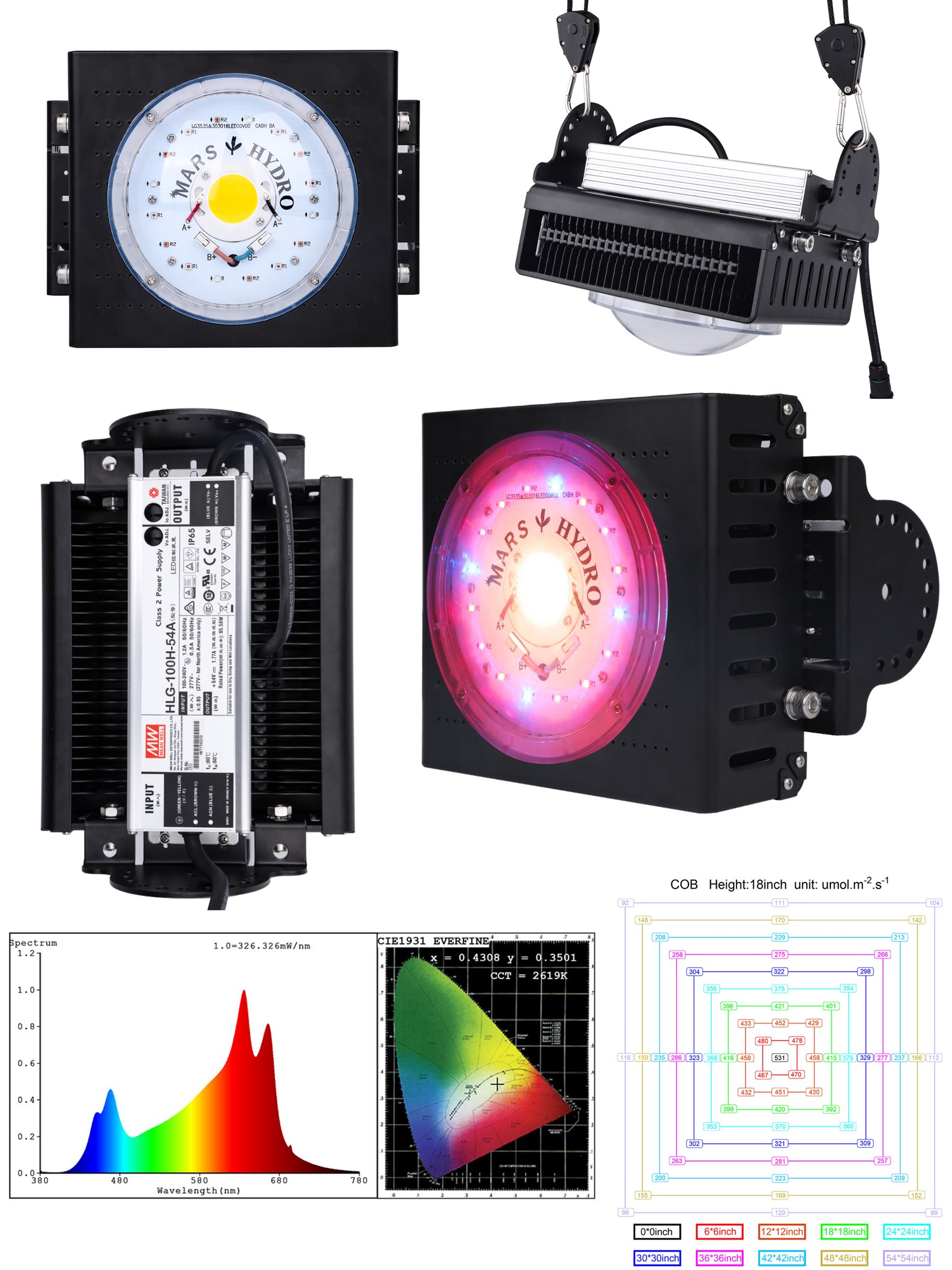 Read user reviews by this link